So PalmOS is really dead now? 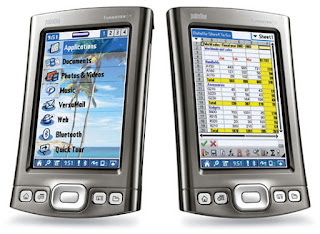 I've been enjoying me PalmOS devices for quite some time now. First as an organizer and multimedia device and later as part of my collection of obsolete technology. What I really liked about PalmOS was it's speed and 'simplicity' if I may call it that. Of course I'm looking at an of from the past, knowing that there are a lot of OSes for portable devices that have a lot of features that PalmOS never had.

In the past years I've had a Sony Clie PEG-N760C and a PEG-NR70V. Later I upgraded to the Tungsten T2, then the T3 and finally the LifeDrive (which I've upgraded to an 8GB CompactFlash card). Of all those devices, only the T3 and the LifeDrive are still with me (and in working order :D). Recently I acquired a Palm Tungsten T|X, which was one of the last devices that Palm made before switching over to WebOS on the Pre series of smartphones. I was surprised to find that this device actually has received a patch/update to support WPA2 and WPA Enterprise! That is friggin AWESOME! While the Tungsten T|X only has Wireless B built in (802.11b = 11mbps) it works, and the device probably wouldn't be able to handle much more throughput anyway. Because the digitiser was broken, I ordered a new one from eBay, and it was pretty easy to replace it. It seemed like I had a high-end PalmOS device with WiFi, Bluetooth and a "high res" screen.

This is how I got started on wanting to revive PalmOS, at least from a developers perspective. I wanted to write (or port) a JSON library and use it to interact with REST API's or something. Or a remote control for my home automation system. Or basically anything that I could code that did not exist yet for PalmOS. But I hit a few roadblocks.

Lack of documentation and community

There isn't a lot of 'publicly available' documentation on PalmOS development. While the SDK docs can be found in some of the deep dark corners of the web, and a development environment can be set up, there is just no active community at all. It seems like development has stopped for about 10 years (or more!) and all what is left is these obsolete devices that are not able to use most of their functionality. Considering the fact that the devices aren't sold anymore, there is no market for software development on PalmOS and you're not actually gaining anything other than personal satisfaction (most people have forgotten that PalmOS existed at all!) this seems reasonable.

While some tools exist to convert CA root certificates to PDB files, the PalmOS does not support SHA256 certificates. This means that most of the HTTPS interwebs is not reachable from the browsers, and secure communication is basically impossible. Most companies that have a WPA2 Enterprise-secured WiFi-network use an SHA256 certificate and this makes using the Tungsten T|X on a corporate network (or country-wide WiFi-hotspot network like the Dutch Ziggo WiFiSpots) impossible. SHA256 has been used in at least one application that I know of, pssh2. Unfortunately re-using this code in an application and rewriting part of PalmOS are two different things.

So what can we still do with our legacy devices?

When these devices were still awesome, a lot of cool stuff has been made. And because the internet was not as big as it is today, most of these apps work offline! Over the next few weeks I'm going to show a few applications that I've used in the past decade and might be nice for you to re-live the PalmOS days again :).

The PalmDB community strives to host files for abandoned projects as well as ROMs for devices and other useful tools. Check it out here. They have a Discord as well! Also Dmitry Grinberg is hacking Palm OS like there is no tomorrow, and there is a guide on how you can get started with a toolchain for PalmOS development here. Of course there is a subreddit as well: /r/Palm. Have fun!
Posted by Felix Mann at 17:28
Email ThisBlogThis!Share to TwitterShare to FacebookShare to Pinterest
Labels: C, Garnett, nostalgia, obsolete, Palm, PalmOS, prc, SHA256, Software Development, Tungsten, Tungsten T|X, WebOS