I purchased a Japanese Sony Clie PEG-UX50: can I turn it into an English device?

If you've known me for a certain amount of time, sooner or later the subject of my fascination for the Palm OS ecosystem might have come up. For the people who are unfamiliar with this particular fascination, a little backstory.

How did my fascination with Palm OS begin?

When I was about 13 years old it was apparent that I had some issues organising certain things in my life (such as: homework, showing up at violin lessons on time, time keeping in general). I'm not sure how, but at some point my love for Tech led me to a solution: I could get a second hand Palm OS PDA to help me! I'd just put every appointment and deadline in this thing, and it would remind me whenever I'd need to do something.

This first device was a Sony Clie 4.x device (the PEG-N760C), and after that I upgraded to a Clie NR70, a Tungsten T2, Tungsten T3 and finally the LifeDrive. From the devices listed here I sold the Clie's, broke the T2 and I still have the T3 & LifeDrive.

However, now that phones were getting smarter and smarter my need for a PalmOS PDA as a daily driver decreased. Feature phones could sync with Google Calendar and even Email and RSS clients were prevalent in most feature phones in the era of 3G connectivity. Once I upgraded from a Sony Ericsson W850i to the W960i (which ran Symbian) I ditched the PalmOS devices altogether.

I do not speak Japanese

These days I am used to being able to reboot a device into a DFU or Fastboot/Bootloader mode where I can supply a ROM file or update to change the firmware of a device. We see this in the RP2040, Android phones, 4G USB dongles, hardware wallets, fitness trackers. When I purchased a Sony Clie PEG-UX50 on Sendico I somehow forgot about the fact that at the time firmware updates were nowhere as available as they are today. Oh, and the fact that Palm OS devices had different ROMS based on the region where it was used. If you purchased your device in Japan, you only have Japanese applications inst
alled and nothing else to choose from. Which I did. And I don't speak (or read) Japanese.
The issue here is that if a device hasn't received a firmware update from the manufacturer in it's lifecycle, you'll have to resort to reverse engineering the protocol using 0 resources. Because at the time manufacturers didn't really follow a reference protocol for these things. In some cases you send some magic bytes over serial, and everything you send afterwards is directly written to the flash chip. In other cases a protocol has been used for several generations of devices from the same manufacturer. Sometimes a Windows updating app was released to end users, sometimes a .prc file patched ROM files (so the update changes only live in RAM. If you fully deplete your battery, your device returns to its unpatched state).

Dmitry Grinberg is one of the Palm OS heroes. Their fascination with the OS has led to software that was amazing when Palm OS was "alive", but grew even more when it died. Nowadays Dmitry is working on making Palm OS 5.x work on Palm OS 4.x devices by use of a SDIO/Memory Stick containing an ARM CPU, this project is called rePalm. It's worth a read if you're curious.
However in the process of discovering what makes a Palm OS ROM tick Dmitry came up with this concept of 'split ROMS', a format that allows him to decompose a ROM dump into files, while maintaining the ability to assemble back to a valid ROM again. Luckily he had a split rom for the en_US UX50, so I could extract the zip and install the PRC files to see which ones break, and which ones don't.

Installing general.prc from the split ROM causes the system to fail during a soft reset. However, installing the following files translates most of the preferences: 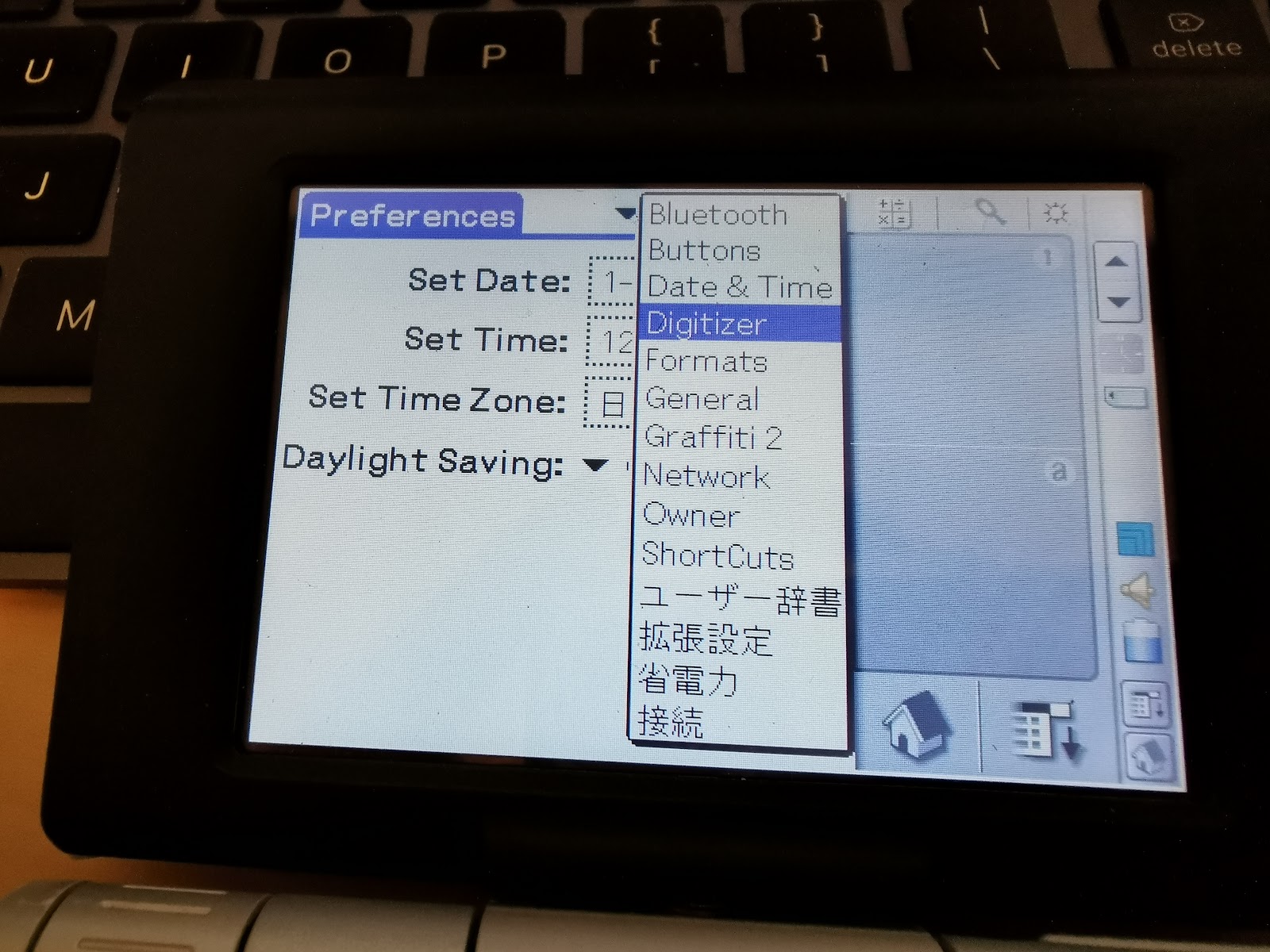 Note: any file that has a _enUS postfix will have to be copied to internal memory first (I used FileZ to do this), and then renamed (to _jpJP) using Bird (or something similar). This allows the native applications to load the text strings as if they were the "native" translations for the app. It looks like the actual application code is the same for most of these "preference"applications.
Other applications that can be installed from the split ROM:
Files to avoid touching:

So: it might be hard to impossible to achieve a cross-region ROM flash for these devices because the manufacturer never released any ROM updates, so the update mechanism would have to be reverse engineered, which likely means sacrificing devices in the process.
However, by using split rom archives, we can install translation files of most of the preferences to the device RAM and change their identifier (from _enUS to _jpJP) so that the system thinks they should use these translation files instead of the ones in ROM. This allows us to use the device (mostly) as if it were an English device. The translation files are ususally small and it shouldn't be a huge sacrifice to have these installed in RAM for most people.
Some of the CLIE apps include their text strings in the app itself. This means that the entire app needs to be installed in RAM. Whether this is worth it is up to the user. But CLIE Album is a few hundred KB, so it might not be worth it if you never use that particular app.
If I make any significant future discoveries I'll share them here. Hopefully sharing this knowledge has been useful to others. If it was, please let me know by leaving a comment.
Posted by Felix Mann at 14:47 No comments:
Email ThisBlogThis!Share to TwitterShare to FacebookShare to Pinterest
Labels: Palm, PalmOS, PEG-UX50, Sony, UX50
Newer Posts Older Posts Home
Subscribe to: Posts (Atom)