Tidying up the "server room"

I have a NAS, a UPS, a Powerline adapter, a Philips Hue Bridge, an OpenTherm Gateway, and an OpenPi (Raspberry Pi Compute Module breakout board) in the hallway closet. There also was a 2nd gen Airport Extreme, but it has been replaced with a less power-hungry and more performant alternative. But even then, it was an utter mess.

Unfortunately I have forgotten to make a 'before' picture, but I assure you, the empty space next to the NAS was filled with the items listed above. Wires everywhere. And even removing the Airport did not solve this.

Then I decided, everything with mounting holes has to hang on the wall. And sometimes it's these small things that make a big difference. Mounting a piece of wood to the wall and putting some screws in allowed me to reduce the cable clutter (most of the cables can now be tucked away behind the NAS) and because the devices aren't laying all across the place, power cables are now routed together in a bundle.

Now the only thing I have to do is wall mount the OpenPi. But I'll do that some other day. Even small improvements like this can make a great difference: it's so much easier to service a device without accidentally unplugging something else! Do yourself a favour and go after the low hanging fruit. You'll thank yourself later :) 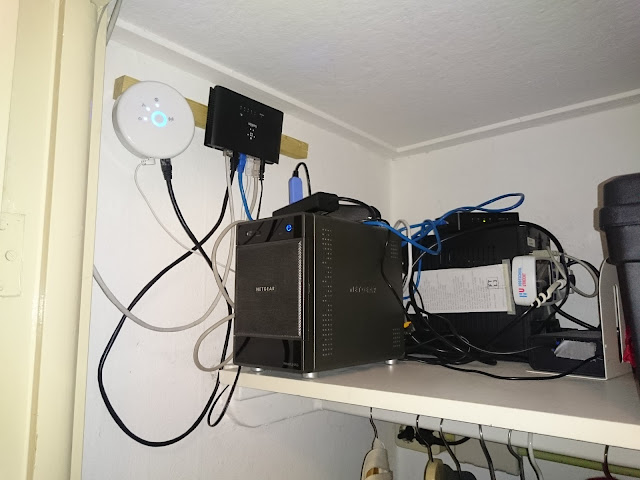 Posted by Felix Mann at 09:07
Email ThisBlogThis!Share to TwitterShare to FacebookShare to Pinterest