I've been meaning to do a small write-up on my latest project, and add-on board for DigiStump's Oak board; an ESP8266-ish-based mini board with an on-board LDO that is programmable with the Arduino IDE using Particle Cloud. The Oak was successfully funded using KickStarter and I got my board pretty fast! While the firmware is not yet finished I've been able to make a prototype and think about what I wanted to do with a cute Arduino-IDE-compatible-wifi-equipped-board like this. You can find the project on GitHub.

I've recently moved in with my girlfriend (who does awesome drawings, by the way!) and because this meant having to pay the electricity bills ourselves I wanted to know whether we would have to pay extra (for consuming more electricity and gas than anticipated) or that we'll receive money for consuming less of both. I was also interested in how much energy was consumed at a given time of day. This helps us decide which devices to keep plugged in in stand-by, and which devices to fully unplug. Because I'd heard of some Arduino-based projects using an TCRT5000 to do just this, I decided I wanted to design a board to do the same, but instead it would be cheaper, easier (both to use and to update, thanks to Particle OTA updates), and smaller than a regular Arduino. After some prototyping I decided on using an SSD1306 OLED display (128x64 pixels) that I has lying around at work. I hooked it up, and (fortunately!) someone had already written a library to use the SSD1306 on the ESP8266. As Particle handles WiFi connectivity that meant that the only thing I had to do was write code to calculate the time between pulses of the KWh-meter, and I should be good to go, right? So I decided to design a PCB to put the Oak, the TCRT5000 and the SSD1306 display on. 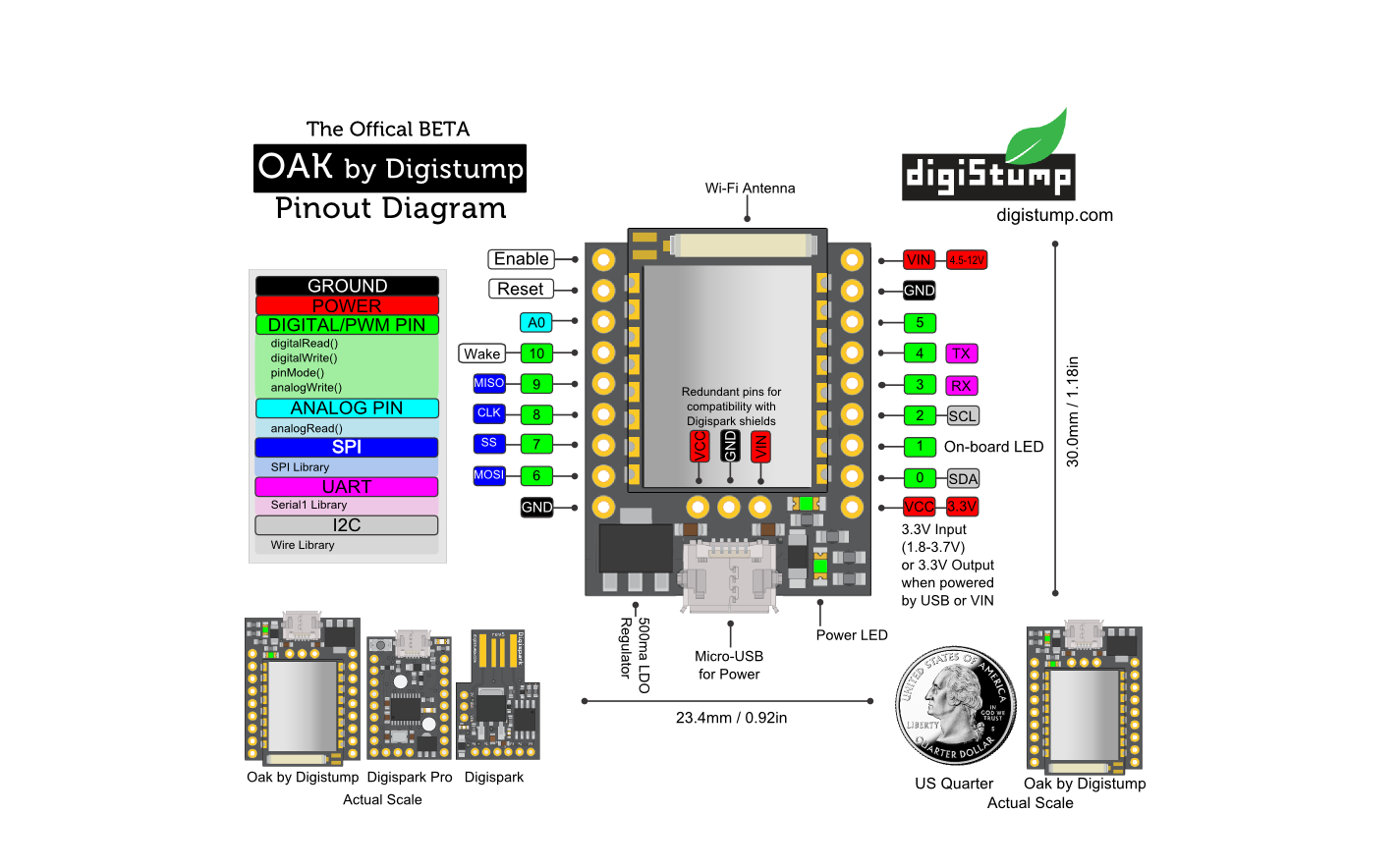 Designing the first board (also: the first mistake)

Because the prototype seemed to do what it should, I put a PCB design together and sent it to OSH-park. I received the boards pretty soon, and I was happy with them, until I tried to get measurements from the TCRT5000. I had forgotten to check whether we would be using the TCRT5000 input as analog or digital. Where the Arduino has a lot of ports to use (usually 6 or more analog, and a lot more of the digital kind), the Oak has only a single port that is able to do analogRead (port 0). Fortunately I had been using port 5, so I could add a bodge-wire and continue with my firmware.

On a side note: I really like the board as it is. OSH-park is great and I would recommend it to anyone who wants to do a small prototype run. Compared to services I've used, the web-based interface is easy and shows renders of how the board will look. Every layer is separately rendered and I've been able to spot some mistakes before sending the board to fab. The purple color is funky, and of course that also counts for something, right?

Current stage of the project

The latest developments on the board have been that I'm currently not able to reliably attach the board to my KWh-meter. This means I can't write/test code at the moment, but I hope to be able to test this soon. If pulse detection works I can do some tests on other meters and find a way to semi-permanently attach the device to anyones (spinning disk type) KWh meter.

If you want to check it out, go to github. Both the board and the code files are there. I've opened a topic on the digistump boards for this project, so if you already have an account there, you can also contact me in the topic on the Projects board. If you have any suggestions, contact me or leave a message. Thanks for reading!